You are using an outdated browser. Please upgrade your browser to improve your experience and security.

What is AADC deficiency?

Watch this short animation to learn more about what causes AADC deficiency and the common signs and symptoms of the condition.

It affects the child’s nervous system…

AADC deficiency is caused by a change, known as a mutation, in a gene called DDC or dopa decarboxylase.

Mutations in this gene means that the body can only produce a small amount of the AADC enzyme.

The lack or deficiency of AADC affects the body’s production of critical, natural chemicals, called serotonin, dopamine, adrenaline and noradrenaline.

These chemicals act as messengers sent between the cells in the nervous system.

But, without a functional messaging system, important processes in the body are impacted, leading to symptoms that limit the activities of daily life.

The symptoms of AADC deficiency can vary from one child to another, but most affected children show symptoms in the first few months of life.

The most common symptoms include: Low muscle tone – also known as hypotonia or ‘floppy muscles’.

Delays in development – such as the ability to lift and control the head, say words, sit or stand without support, and walk.

Involuntary movements, such as contracting muscles, may also happen at the same time.

Children with AADC deficiency may also show signs of: Other involuntary movements, such as sudden jerking, flailing or twisting, excessive sweating or crying, drooling, drooping eyelids, a stuffy or runny nose, irritability, problems with digestion and feeding, sleeping problems, and epileptic seizures.

If you suspect your child has AADC deficiency, ask your child’s doctor for more information about the disorder and testing.

Early, accurate recognition of AADC deficiency can help improve the care and support these children need.

What are the signs and symptoms of AADC deficiency?

AADC deficiency can cause a range of different symptoms, including:

What is a genetic disorder?

Understanding changes in your genes

What happens in AADC deficiency? 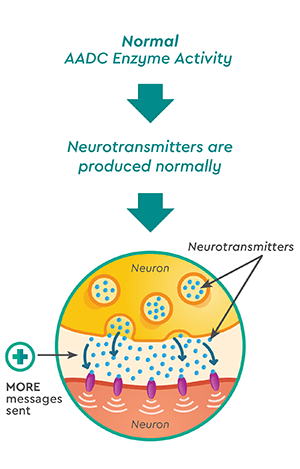 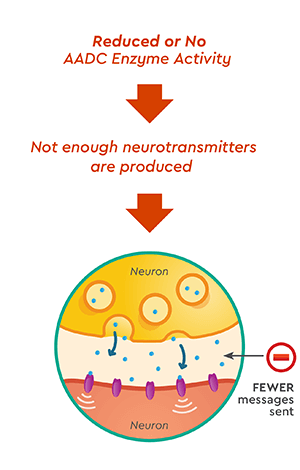 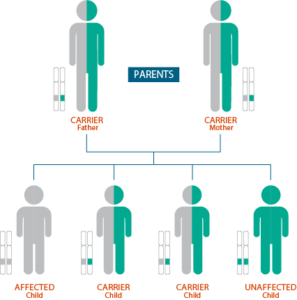 Because both copies of the DDC gene must be altered for a child to have AADC deficiency, it is known as an autosomal recessive disorder.

Analytical cookies are used to understand how visitors interact with the website. These cookies help provide information on metrics the number of visitors, bounce rate, traffic source, etc.

Functionality cookies, which allow us to enhance your experience (for example by remembering any settings you may have selected).

Advertisement cookies are used to provide visitors with relevant ads and marketing campaigns. These cookies track visitors across websites and collect information to provide customized ads.